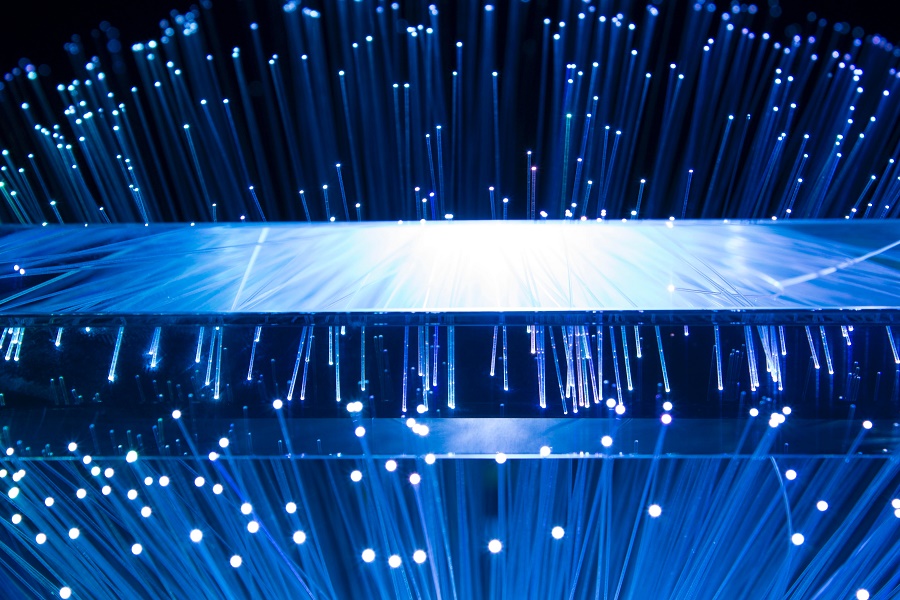 With so many technical terms to contend with in telecommunications we wanted to put together a glossary to help out. A lot of people we deal with are experts but we think there might be a couple of terms even they don’t know in there. Let us know if you think we missed any!

The amount of attenuation from the conversion of optical power to heat in fibre optical cable.

Characteristic of the attenuation of an optical fibre per unit length, measured in dB/km.

The reduction in optical power as it passes along a fibre, usually expressed in decibels (dB).

A device that reduces the signal power in a fibre optic link by inducing loss.

The scattering of light in a fibre back toward the source, used to make OTDR measurements.

The range of signal frequencies or bit rate that a fibre optic component, link or network will operate within.

The loss in fibre caused by stress on the fibre being bent around a prohibitive radius.

The amount of data bits transmitted and then received in error.

A protective coating applied to the fibre.

The spreading of a pulse in an optical waveguide over time. This is caused by the wavelength’s dependence on the velocities of light.

The coating over the core of the fibre that “traps” light into the core.

An optical device that splits or combines light from more than one fibre.

A technique for measuring the loss of bare fibre. First, the optical power transmitted through the fibre is measured. Then cutting back to the source, measuring the initial coupled power.

The wavelength beyond which singlemode fibre only supports one mode of propagation.

A unit of measurement of optical power which indicates relative power on a log scale, sometimes called dBr.

The temporal spreading of a pulse in an optical waveguide. Can brought on through modal or chromatic effects.

A LED that emits from the edge of the semiconductor chip, producing higher power and narrower spectral width.

The quality of the end surface of fibre prepared for splicing or termination.

The amount of light lost in a coupler, beyond the inherent loss in splitting to multiple output fibres.

An all optical amplifier that increases signal output power without electronic conversion.

An instrument that couples visible light into the fibre to allow visual checking of continuity and tracing for correct connections.

A device that clamps onto a fibre and couples light from the fibre by bending. It identifies the fibre and detects the high-speed traffic of an operating link.

Light transmission through flexible transmissive fibres for communications or lighting.

A combination of transmitter, receiver and fibre optic cable connecting them so they are capable of transmitting data. May be analogue or digital.

An instrument that splices fibres by fusing or welding them, usually by electrical arc.

A type of multimode fibre which uses a graded profile of refractive index in the core material to correct for dispersion.

A measure of the speed of light within a material.

A liquid used to match the materials at the ends of two fibres which reduces loss and back reflection.

The refractive index of a fibre as a function of cross section.

The loss caused by inserting a component such as a splice in an optical fibre.

The protective outer coating of the cable.

A short single fibre cable with connectors on both ends used for interconnecting other cables or testing.

A semiconductor device that emits high powered, coherent light when stimulated by an electrical current. Used in transmitters for singlemode fibre links.

A jumper cable attached to a source and calibrated for output power used as a reference cable for loss testing. This cable is made from fibre and connectors of a matching type to the cables to be tested.

The greatest amount of loss that a link can tolerate.

A semi-permanent connection between two fibres made with an alignment device and index matching fluid or adhesive.

The temporal spreading of a pulse in an optical waveguide caused by modal effects.

A measure of the core size in singlemode fibre.

A device that removes optical power in higher order modes in fibre.

A device that mixes optical power in fibre to achieve equal power distribution in all modes.

A device that removes light in the cladding of an optical fibre.

A single electromagnetic field pattern that travels through fibre.

A fibre with a core diameter much larger than the wavelength of light transmitted. It allows many modes of light to propagate. Commonly used with LED sources for lower speed, short distance links.

A measure of the light acceptance angle of the fibre.

A device that amplifies light without converting it to an electrical signal.

An optical waveguide comprised of a light carrying core and cladding which traps light in the core.

The amount of optical power lost as light when transmitted through fibre, splices or couplers.

A measurement instrument for optical loss that includes both a meter and source.

The amount of radiant energy per unit of time. It’s expressed in linear units of Watts or on a logarithmic scale. It can be declared in dBm (where 0 dB = 1 mW) or dB (where 0 dB = 1 µW).

The Light reflected from the cleaved or polished end of a fibre. Caused by the difference of refractive ratio of air and glass, usually 4% of the incident light. Expressed in dB relative to incident power.

A device that routes an optical signal from one or more input ports to one or more output ports.

An instrument that uses backscattered light to find faults in optical fibre and therefore infer loss.

A semiconductor that converts light to an electrical signal, used in fibre optic receivers.

A short length of fibre attached to a fibre optic component such as a laser or coupler.

An optical fibre made of plastic.

A fibre made with a glass core and plastic cladding.

The difference between the transmitted optical power and the receiver sensitivity. Measured in dB and dBm, respectively.

An instrument that measures optical power emanating from the end of a fibre cable.

The large diameter glass rod which fibre is drawn from.

A fibre optic jumper cable attached to a power meter used as a reference cable for loss testing. This cable must be made of fibre and connectors of a matching type to the cables to be tested.

A device which uses a photodiode and signal conditioning circuitry to convert light to an electrical signal in fibre optic links.

A property of optical materials that relates to the velocity of light in the material.

A device that receives a fibre optic signal and repeats it for retransmission, used in very long fibre optic links.

The change of direction of light after striking small particles that causes loss in optical fibres.

A fibre with a small core, only a few times the size of the wavelength of light transmitted. It only allows one mode of light to propagate. Most commonly used with laser sources for high speed, long distance links.

A laser diode or LED used to inject an optical signal into fibre.

A device that provides a connection between two fibres, usually designed to be permanent.

The distribution of power between the output fibres of a coupler.

A multimode fibre where the core is the same index of refraction.

An LED that emits light perpendicular to the semiconductor within it.

A comms device that allows conversation over unused fibres.

A short single fibre jumper cable with connectors on both ends used for testing. This cable must be made of fibre and connectors of a matching type to the cables being tested.

An LED or laser diode used to inject an optical signal into a fibre for testing the loss of the fibre or other components.

The confinement of light in the core of a fibre by the reflection off the core-cladding boundary.

A device which includes an LED or laser source and signal conditioning electronics that are used to inject a signal into fibre.

VCSEL is a type of laser that emits light vertically from the chip instead of from the edge.

A device that couples visible light into the fibre to allow for visual tracing and the testing of continuity. If bright enough they can be used to find breaks in fibre through the cable jacket.

A measure of the colour of light, usually expressed in nanometres (nm) or micrometre (μm).

A technique where signals of different wavelengths of light are sent into the fibre all at once.

The difference between the power budget and the loss budget, measured in dB.